Just now getting the time to sit down to cover our chases from April 10th and 11th. What a great couple of days with some pretty solid structure on the 10th. Monday the 11th proved somewhat frustrating given the fact we were in east Texas terrain and road network, combined with pretty quick storm motions and a fast moving / undercutting outflow boundary that kept things pretty sloppy, but we were able to get some solid structure by the end of the day which always makes the drive home not so bad.

April 10th. A historical day in weather. On this particular day in 1979 which is deemed Terrible Tuesday a large and powerful F4 tornado struck the city of Wichita Falls, TX. It was one of the costliest tornadoes in US history and took the lives of many and destroyed a large portion of the city leaving a path of total destruction in it's wake. As a storm chaser, chasing on the anniversary of historic tornado day is a bit of an omen. Especially when your target is in the vicinity of said past event.
Amanda and I started the day gathering everyone up, accompanied by my sister Jessica, soon to be sister-in-law Taylor and day tour guest Koby. My target area for the day was Vernon, Texas.
A dryline was to mix east this day out of west Texas with good instability in the warm sector. There was a concern regarding "just in time" moisture return and lagging wave / large scale ascent. Though there was a chance for tornadoes, it was not likely given the fact moisture was a little on the lean side. Our real goal heading out the door was supercell structure.
We made the drive from Sherman, Tx to Vernon where we had lunch while waiting out initiation. Surface winds and 850's for most of the day had a SWrly component which had hampered moisture return some. We really needed that wave to kick in to place more convergence on the dry line and help back surface winds. Some multi cellular convection finally started to fire the the SW of our location, with a more discrete storm that fired near Lubbock that seemed to be in a better forced environment given the fact it was taking on supercell characteristics. High cirrus deck started to fill the sky and convection started to fire in a not so desired fashion. These disorganized storms/clusters were on the nose of a moisture/instability axis. Our hope was that the large scale ascent would make it in time before dark to help the updrafts get the boost needed to get organized. We waited a while in Vernon to see what this cluster would do to our SW. A dominant cell would take over the cluster, then weaken and a new cell would dominate. Our curiosity finally got to us and we dropped SW out of Vernon to explore this struggling complex. The storms were high based,  dumping precip and small hail. Nothing really too exciting. We stayed on this storm as it began to pick up some speed and started to head back towards Vernon. We decided the best thing to do was get well ahead of the storm, give it more time and watch from a distance until or if it got its act together. While heading back east on 287 we were greeted with an INSANE CG lightning barrage. It was intense! CG's striking everywhere around us. We cruised back to the north to 183 to cross the Red River and enter Oklahoma. We sat in Davidson, Oklahoma watching the CG show and planning navigation. We decided to head east some more on 70 back toward Grandfield. Stopping just west outside of Grandfield the storm was slowly starting to organize and a nice rain free base was present. The storm had a cell merger starting to impact it's forward flank and that slowed down some organization. Once the storm ingested the cell merger SErly surface flow began to feed the storm. A nearby chaser had a Davis weather station and I asked if he could get a dew point reading, which was 64F. Not bad at all! Considering the dews in Vernon earlier as we were departing that area were in the mid 50's. Above our heads low strato CU were starting to race into the storm. Inflow baby! The once struggling outflow dominant storm was now becoming a supercell. Scud began to pull from the precip core towards the rain free base where in moments we had our first wall cloud of the day. 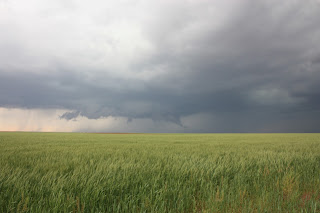 We took a moment to snap some photo and admire the beautiful sight to behold over the green Oklahoma wheat field. Unfortunately not long after outflow began to undercut and it struggled to maintain inflow dominance.  So we decided to core it and play a little and get back ahead of it. Jumping on SR 36 we head north through the core and then east on HWY 5 we encountered copious amounts hail up to half dollar size. As the precip core began to thin from departing the core. I noticed a nice base once again, upon exiting the core we were treated with a nice lowering just above our heads and I-HOP pancake structure. We stopped as soon as it was safe to and snapped a few pics. 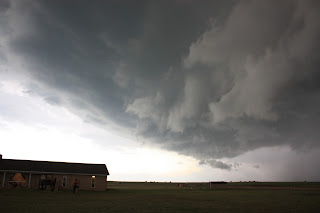 The storm was rapidly reorganizing, it had broken off the linear like structure it was attached to and began to be a right mover.. Excitement filled the air, we were gonna get our structure!

We continued on HWY 5 towards I44. we stopped a few more times to capture this stunning beast! 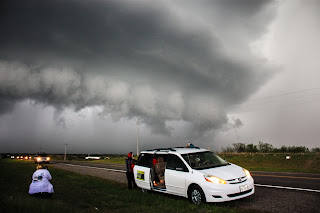 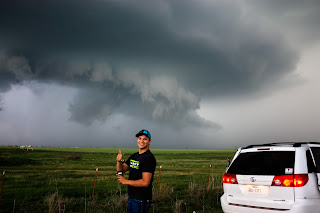 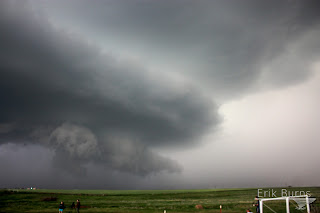 Wanting to get that blue light evening setting that us photographers love so much we headed east some more east of Walter, OK and set up on HWY 65 watching the supercell do its thing. The sky was wonderful! 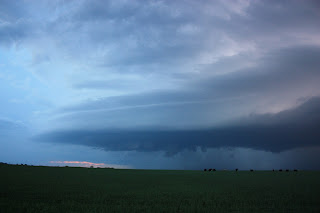 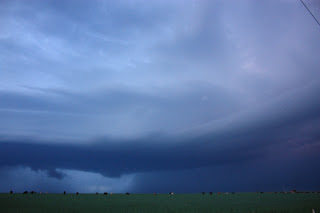 Right after these photographs the storm tried to perform tornadogenesis. A tight RFD quickly developed and before our eyes a lowering was starting to wrap up. Crappy photo but you will see what I am talking about. It was hard to see if it ever touched down or how much rotation there was but it was totally textbook. 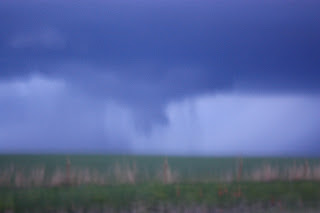 The day was not over yet though! A quick look at the radar showed a lone supercell approaching Burkburnett, TX. Storm was exhibiting strengthening low level rotation and we quickly jumped onto I44 south for the new supercell.

As we approached Burkburnett the storm went tornado warned and tight couplet was being displayed on velocity. With no good road options and the storm riding the Red River we decided to move in closer right up to the circulation and give ourselves a good escape route in Burkburnett. Staying on the north side of town we got onto the north bound service road with the exit back onto I44 right in front of us. With extreme caution we watched looking for powerflashes or debris or anything that would indicate an approaching tornado or strong circulation. Like a ghost coming into view about a block away rapidly rotating rain bands entered our sight and then strong NErly winds kicked in. With the van in drive getting ready to jump back on I44 and haul to the north we watched. The circulation stayed to our south and Amanda was able to grab a shot of it as it crossed I44 about a block south of us. 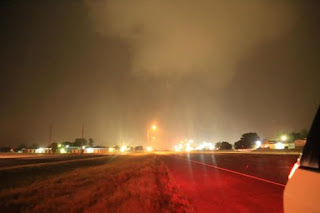 We left the storm and headed for one more SW of Wichita Falls. Beautiful clear star lit skies and a supercell. We took some photos and then headed to Bruams were we enjoyed a good late night dinner. I appreciate the kind service we experienced there. We walked in 10 minuted before they closed and they were happy to serve us. I hate doing that to folks but they were troopers.
Chaser Encountered: Chris Hayes, Adam and Melissa Cuker, Tammy Bethel, Daniel Shaw.

April 11, 2016
I am not gonna cover this day as much because 1. it was east Texas. 2. storms got undercut by a stupid southward dropping outflow boundary.
My target area for this day was home actually here in Bells, Tx. I was watching visible sat, radar trends and Mesoscale Analysis. Storms over Lake Texoma in southern Oklahoma were building and throwing a cold pool. One of these cells took root and hauled ENE across southern Oklahoma puking cold air during it's path. There was a cell trying to get going in Collin county about 25 minutes from my house. It was stationary and trying to root on very slow moving surface convergence zone / pre frontal surface trough. It seemed to have a hard time to mature. My good friend Aaron Little joined me on this chase. It was his first time storm chasing. Once my sister and her fiancee arrived traveled south on HWY 69 towards Greenville, TX. We had to punch the storm from the north into a crazy precip core where street flooding was rapidly occurring in downtown Greenville. As we approached this storm it was rapidly taking on supercell appearance on radar and strengthening. It was a fight to get to this storm and see if it would produce before the outflow boundary to the north of it ran it over and cause it to be in a rain cooled environment and make it go to mush. Well, Cold air always wins. We struggled to follow this storm and it was crap. We encountered some golf ball hail while trying to race it east on I30. It went tornado warned as a cell merger got pulled in, we briefly saw the base and rain curtains wrap up around it, then it was gone, buried in rain, pulled into the core. I gave up on this storm right after.

Soon after I contacted my sister Jessica and brother-in-law Ricky, who were trying to play catch up.
We met in Sulphur Spring, TX. After a quick bathroom break and snack grab we flew back west to intercept the monster that smashed north DFW and especially Wylie, TX with monster gorilla hail. This storm had began in NW Texas and traveled all the way through DFW into East Texas. We got on the storm just west of Emory, TX. It of course was an outflow dominant beast. It provided some some great structure over around Lake Tawokani. We followed the storm where it went tornado warned briefly but we never saw anything much, too much cold air puking out of the storm. We stopped in Mineola, TX where we enjoyed some GREAT burgers at the East Texas Burger Company in the down town strip.. Here are some shots of this day. 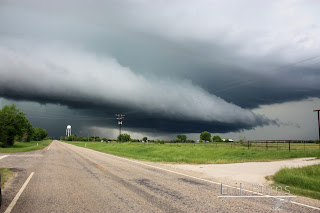 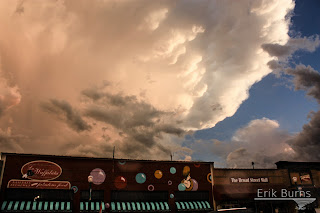 Great pictures! Every time we head out we think about the risk you guys put in to further the scientific research. That research is what helps the rest of us hone our craft in safety structures like community storm shelters to a higher standard. Thanks!